All praise is due to Allaah alone and may His peace and blessings be upon His messenger and slave, Prophet Muhammad, as well as on his family and companions. Allaah said:

“And of His signs is that He created for you from yourselves mates that you may find tranquillity in them, and He placed between you affection and mercy. Indeed in that are signs for a people who give thought.”

The above-mentioned verse of the Qur’aan implicates the framework for the basis and some of the objectives of marriage in Islam in general.

However, today we are only going to discuss some of the most common reasons why dissolution of marriage occurs.

After pondering on all the ingredients, also reading secrets written and shared of a successful marriage, and above all the beautiful verses of the Qur’aan and guidelines set by the Prophet for a prosperous lifetime relationship, I embarked on writing about what makes it fail.

For an outsider to any marital dispute, it can be very confusing. There are so many thoughts and questions in your mind, such as:

Before going any further I would like to share a hadeeth, which illustrates the importance of marriage and the grave danger of breaking it. Jaabir has reported that Allaah’s Messenger (sallallaahu alaihi wa sallam) said:

“You have done nothing.” Then one amongst them comes and says:

“I did not spare so and so until I sowed the seed of discord between a husband and a wife.” The Satan goes near him and says:

“He then embraces him.”

After going through the statistics of various countries and cultures regarding the number of marriages and divorces and the courses of divorces, I feel it is only appropriate to share some of the information here.

The World’s 10 Most Divorced Nations are as follows: In Saudi Arabia, 8 divorces occur every hour, in spite of the general public enjoying a fairly good financial status. To get married easily for the first time and again after divorce, if one is able to financially, may be a reason for this increase in divorce. Also, physical and mental abuse and extreme jealousy have played a major role in divorces.

In Egypt, the economic factor has played a major role in family feuds where up to 20 divorces an hour take place. Huda Jadul Haqq, a researcher in women’s affairs and one of the activists for them, says that the law of Khul’ (Islamic term which means: the separation of the wife in return for a payment; the husband takes the payment and lets his wife go, whether this payment is the mahr (dowry paid by husband to wife) which he gave to her, or more or less than that) has made it easier for women to get their divorce. A woman in Egypt would pursue a divorce or settle for Khul’ for many reasons; though the most important one is the financial condition, apart from a husband failing to meet the marriage obligations. The growing number of women who share the financial responsibilities has become a reason also as men tend to depend on this trend. Most of the dissolutions happen in the first year of marriage.

Surprisingly, in Tunisia where 1000 divorces take place on a monthly basis, with a population of around 12 million, 40% of the reason has been associated with sexual issues. Unemployment and harsh economic conditions play a vital role in almost all the divorces.

When it comes to UAE, social media comes as the first culprit for the divorces which in the beginning of 2016 was at 4 divorces per day. Continuous social media interaction has become a pandemic in many societies as this makes the couple devoted to it and consequently ignore each other. Smartphones have just added more supremacy to the already boiled dilemma. Being independent financially and able to live prosperously after divorce just adds up. The practice of polygyny is also a known factor to all of the above.

In the war-torn country, Iraq, divorces in the last 10 years have increased by 70% which is now at sixty thousand cases per year. It looks like there is a new culprit (at least seemingly) in the neighborhood. Turkish TV series, which portrays a rosy glamorous picture of couples and consequently leads to discontent in a matrimonial life of Iraqis under extreme duress which they are facing since the American invasion. Local research confirms that Facebook, internet, and smartphones are among the major reasons for divorces. Specifically that they end up interacting with others through these communications, therefore creating jealousy and suspicions and then marital disputes. From the above mentioned it is clear that there can be many reasons. At times it can be just one reason per couple and at times many reasons.

A point to remember is that divorce doesn’t happen by accident. It builds up slowly when people overlook the things that matter most. It isn’t a bubble that’s ready to burst. Though most people assume that a divorce is a shocker, something that comes right out of the blue when it is least expected. It may be true to family and friends, but to the couple involved, it’s something they would have seen all along or should have seen. We shouldn’t take our marriage as granted to last forever with no effort to make it possible.

The fact is that many people have put off marriage due to the increase in the number of divorces and complicated marital issues. Problems constantly build up over time, and at some point, the inevitable happens. Or one more accusation or error pushes the ball downhill and then, everything else comes crashing through the foundation of the marriage.

Apart from what has been already mentioned previously as a case study from certain countries, I am going to mention in general some of the most important factors in our modern day as being the reasons for dissolution of marriages:

I have handled too many cases where not knowing how to utilize the tongue has been the main factor in any misunderstanding. I have found this to be one of the most important factors which many may not consider something important. My brothers and sisters, remember that it is with a tongue that the husband said, “Yes, I accept her as my wife” or that, “I want to get married to her,” and in the end, one may do the total opposite by saying, “I divorce her” as the ultimate unwelcome result. This is where I want to remind myself and everyone with a few of the quotes from the sayings of the Prophet. Al-Bukhari and Muslim narrated from Abu Hurayrah that the Messenger of Allaah (sallallaahu alaihi wa sallam) said:

“Whoever believes in Allaah and the Last Day, let him speak good or else keep silent…”

“Not a word does he (or she) utter but there is a watcher by him ready (to record it).”

The Prophet commanded us to control our tongues in more than one hadeeth, such as that narrated by al-Tirmidhi from ‘Uqbah ibn ‘Amir who said: “I said,

“O Messenger of Allaah, what is salvation?” He replied,

“Control your tongue, keep to your house and weep over your sin.”

(Classed as sahih (authentic) by al-Albani)

Once we learn the art of speaking, many issues, Allaah willing, can be solved before they get out of control. I pray that Allaah gives us ease in maintaining our relationships with our spouses and enables us to be the best to our families. Ameen. 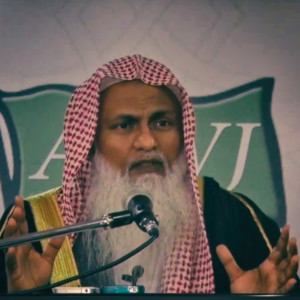